Marcon International is pleased to report nine barges, 12 vessels and a pair of winches sold or chartered in 2020, which brings us to 1,516 sale or charter transactions successfully completed since 1981. 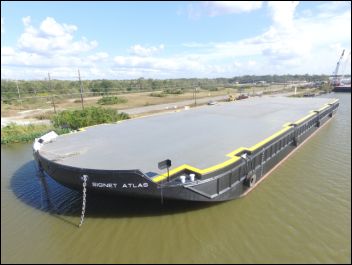 Marcon International, Inc. is pleased to announce the sale of the 300' x 100' x 20' depth US Flag ocean deck barge "Signet Atlas" to US West Coast Buyers SeaTac Marine Services, LLC of Seattle, WA during the last quarter of 2020. The barge is very heavily built with 6' frame spacing, light displacement of 1,876 long tons, and corrugated bulkheads. She carries a uniform deck load of 6,000lbs/ft2 on 29,000ft2 of flat steel deck and has recessed bollards. She can also accommodate extra heavy loads of 20,000lbs/ft2 at the bulkhead junctions. The newly re-named "SeaTac Atlas" was built in 2010 by Signal International, in Orange, TX and has a loaded draft of 16.0', with a corresponding deadweight of 10,340 long tons. She is a fast towing barge with a 24' long "parabolic bow", and a 40' stern rake. The barge is ABS +A1 classed as a deck barge, is coated internally and in excellent overall condition upon delivery to the new Owner. The barge is now on the US West Coast in Seattle undergoing installation of bin walls and a higher forward breakwater to handle the heavy seas of the Northwest Pacific Ocean. She will be joining SeaTac Marine's Alaska and Pacific Coastwise Trade. See more at the Owner's Website: www.seatacmarine.com

Marcon International, Inc. is pleased to report the successful towage of a U.S. flag 20,000 barrel double-hull ocean tank barge (our file TB20021) from Puerto Rico to a shipyard in the Gulf of Mexico. The barge was repositioned for drydocking and renewal of her ABS loadline, after which she may be sold. The barge measures 214.5' loa x 54.0' beam x 12.0' depth. She was built in 2000 by Bollinger Shipyard in Amelia, LA and carries an unrestricted ABS ocean loadline and USCG COI for grade D and lower cargoes. She’s a two system barge, typically transporting 10,000bbl of MGO and 8,000bbl of IFO, but can carry around 14,000 to 15,000bbl of IFO if some of the MGO capacity is used. She was originally fitted with coils, but given the warm weather in her operating area, she has not had a heating system installed (but coils remain). Further details and price ideas on request from Marcon. Barge is expected to be ready to return to service in December 2020 with fresh five year certificates. Marcon acted as sole broker for the towage and is offering the barge for potential sale from the owner. 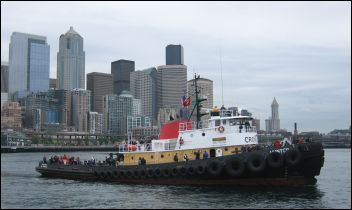 Crowley Marine Services Inc. has sold one of their 7,200BHP Invader series tugs, "Hunter", to private Washingtonian interests. The vessel was built in 1976 as Hull # 224 at McDermott Shipyard Inc, Amelia, LA. The vessel measures 136.2' loa x 36.5' beam x 19.2' depth and is powered by twin EMD 20-645E5 diesels with Falk 4.345:1 gears driving two 132" x 82-88" 5-blade stainless props. Electrical service is provided by two 90kW CAT D3304 gensets. The tankage onboard includes 218,300g of fuel and 10,300g of water. On deck the towing equipment consists of a double drum Markey TDSDW 36C towing winch capable of spooling two lengths of 2,800' x 2.25" wire. The tug was the 21st Invader Class constructed by McDermott for Crowley. The "Hunter" is often referred to as the "fastest tug in the Puget Sound" due to its frequent tug race wins over the years at the Seattle Maritime Festival. Marcon acted as sole broker in the transaction and represents the 124th vessel brokered by Marcon for Crowley Maritime over the last 34 years. 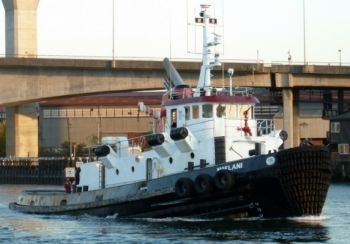 The tug "Noelani" was sold on private and confidential terms recently via the brokerage services of Marcon International, Inc. The vessel was originally built for the US Navy as the "Winnemucca" (USN Designation YTB-785) with keel laid down in 1965 at Marinette, WI by the Marinette Marine Corp. She was launched in December 1965 and delivered to the US Navy as one of the NATICK-Class large harbor tugs in April 1966. The tug, named after the city of Winnemucca, Nevada was originally assigned to the 5th Naval District in the Norfolk, Virginia area where she started her first career in June 1966 until the following Spring of 1967. At that time, she was assigned to Vietnam where she served in that conflict until the US involvement was concluded. She served with Task Force 117, the Mobile Riverine Force. During her almost six years of combat operations on the rivers, swamps and deltas of south Vietnam, the "Winnemucca" earned two US Presidential unit citations and four US Navy Unit Recommendations. "Winnemucca" earned a total of 13 Battle Stars during the Vietnam conflict. At the end of the US participation in that SE Asian region, in 1973, the tug was reassigned to the 17th US Naval District and operated out of Adak, Alaska. Her tour of duty there ended late in 1975 when the ship began her service in San Francisco, where she was attached to the US Navy 12th District through 1979. The "Winnemucca" was eventually stricken from the US Navy List on December 22, 2003 and sold by the US Department of Defense January 21, 2004. The tug was converted to civilian use and bore the new name of "Noelani", which she will keep going into her next service life on the US West Coast. The "Noelani's" dimensions are 109.0' x 28.8' x 16.3' depth, and she is now powered with a single EMD12-710G7B for 3,000BHP (installed in 2012) and swings a 114" 4-blade propeller driven via Western 6:1 reduction gear. Her bollard pull is about 80,000lb., and she has excellent range with her fuel capacity of 50,000g. She is also fitted with a 400HP Vortex V2-36 Wesmar bowthruster which was installed in 2017. Her single drum Series 224 Almon Johnson towing winch has a pennant drum, as well as a level wind, and line-pull of 166,000lbs. The main towing drum carries 2,600' x 2" tow wire, and the tug is also fitted with a hydraulic towing pin system. She has two 2,000gpm FiFi monitors, a hydraulic aluminum fold down mast, 8 ton telescoping crane on the bridge deck, and is fully outfitted with modern NavAids and communication systems. Her electrical system is powered by 2 - 65kW / John Deere Tier 2 gensets, and she has 1 - 20kW / Northern Lights harbor set. The tug has sailed extensively for her former Owner to Hawaii, Alaska and the US Gulf and has excellent sea keeping abilities and fuel consumption characteristics. Marcon acted as sole broker in this sale, and wishes the mighty "Noelani" fair winds and following seas in her future endeavors as a true work horse in the marine industry. 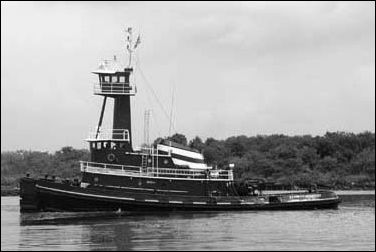 McAllister Towing and Transportation Company of New York have sold their twin screw tug "Barbara McAllister" (ex- Bouchard Boys, T.J. Sheridan, T.M. 1, Ocean Star) to Mar-K Towing in Florida. Measuring 104.6' loa x 36.3' beam, the tug was built in 1969 at Halter Marine, LA. The unit is powered by twin EMD 16-645E2 creating a total of 3,900BHP and is fitted with an Intercon single drum 200 winch. The buyer intends to remove the upper pilothouse and use as a shipdocking tug. Marcon was the sole brokers in the transaction.