Of the 3,711 barges and 13,465 vessels we currently track, 676 are tank barges with 19 inland and 21 ocean or coastal barges officially on the market for sale. The 19 inland tank barges were built between 1943 and 2016, with 12 or 63.2% 25 years of age or over. The oldest inland tank barge listed today is a 78 year old, 9,000BBL tank barge previously used for transporting #2 oil in the U.S. Great Lakes. This old lady is counterbalanced by a foreign-flagged 2016-built 11,070BBL capacity tank barge located the U.S. Midwest. One year ago, 27 inland barges were available with an average age of 26 years and five years ago, 40 inland barges were available with an average age of 27 years. The inland barges currently available for sale average 29 years old. Excess barges continue to sit on the market, with the continuation of scraping or selling for conversion to deck service, which was the case for our most recent tank barge sale.

Of the 25 ocean/coastal barges, only two are less than 10 years old. Four or 19.0% of the ocean & coastal barges are at least 25 years old with the oldest one, a U.S. flagged, double-hull, 41,000BBL barge, built in 1955 and rebuilt in 1978. This is countered by a 2016 built foreign flagged 38,000BBL double hull barge. In May 2017, 53.6% of the 26 ocean and coastal barges listed for sale were 25 years of age or older. Today, five fewer ocean/coastal barges are officially available for sale compared to five years ago and only one more than one year ago. Average age of all ocean/coastal barges for sale today is 21 years old (2001), compared to 23 years last year (1998) and 33 years five years ago (1984). The decline in average age suggests that while older barges have been disposed of, relatively younger units are coming onto the market for sale. 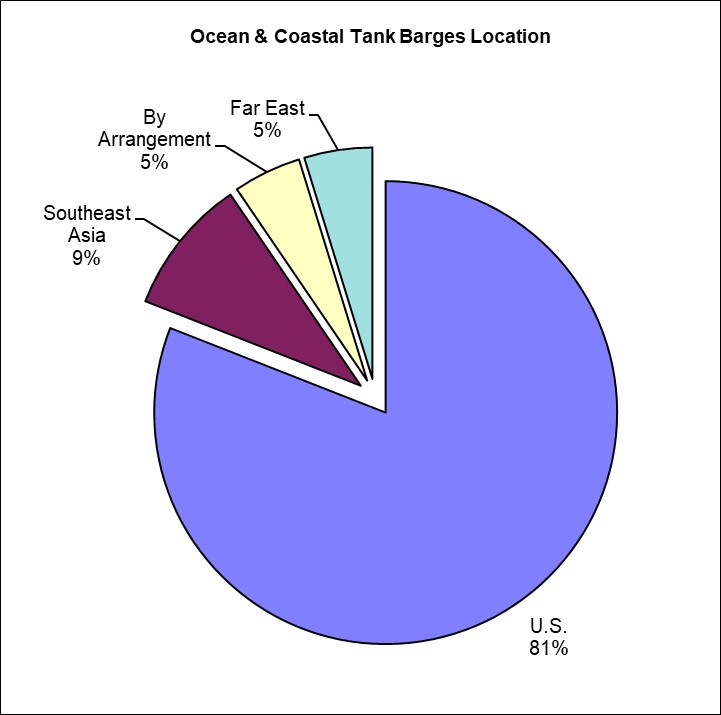 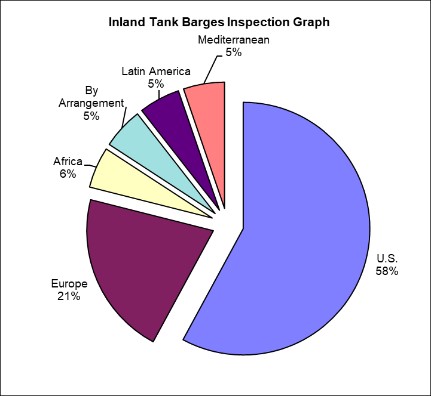 Eleven inland tank barges which Marcon had listed for sale on the report date are located in the U.S., followed by four in Europe and one each in Africa, Latin America, the Mediterranean and location unknown. Seventeen ocean / coastwise barges listed for sale are in the U.S., followed by two in Southeast Asia and one each in the Far East and with undisclosed location. Thirty-four of the 40 tank barges listed for sale worldwide are double hull. Twenty-five of these are U.S. flag of which 18 are 11 - 23 years old and the remaining seven barges are 27 - 67 years of age. The foreign double-hull barges range from six years old in the Far East up to 64 years old in the Mediterranean.

Marcon's Market Comments
Rampant inflation in the commercial marine industry is causing all costs in the tank barge sector to rapidly rise. Oil prices have soared since the February 2022 Russian invasion of Ukraine and this looks to continue. Newbuilding costs in the USA are up roughly 40%-50% from November 2021 to March 2022, and this will definitely have an immediate effect on the newbuilding market demand, while boosting the demand for working / certified tonnage in the US petroleum barging market. These record setting inflation rates have slowed a bit in the last month, but costs for just about everything have risen dramatically over these past few quarters. From the extreme labor shortages for certified mariners to man the tows, to skyrocketing steel prices, and lack of availability of equipment and machinery, it's anyone's guess as to when this rise in costs and demand for tonnage may dampen. If the USA and the world are hit with a recession, this would further exacerbate the efforts of owners and managers to predict the future market trend much further out than the next six months. Outside of shipyard availability, it is very difficult for Owners to predict when machinery and equipment will arrive for scheduled dry-dockings / upgrades and this includes large orders of machinery that were placed many months ago. China recently reported that it would likely not meet its expected 5.5% GDP growth target this year with many economic analysts predicting that the country will suffer a quarterly contraction in Q2 2022. China's steel output was down by 5.2% in April 2022, and industrial output was off 2.9% with manufacturing off by 4.6% and crude oil demand was declining by over 6%. Different parts of the world, and especially China with its stated Zero Tolerance program, are still experiencing extensive slowdowns, shut downs and port closures due to Covid-19 disruptions. This is causing a bit of a shortage of available push boats on the river system due to required dry-dockings for USCG certified vessels and will thereby continue to drive up charter rates for tonnage in this sector. Currently the inland market is enjoying excellent utilization rates, but if the return on charter rates cannot be met, then this may begin to cause a slowdown to the current boost that the market seems to be enjoying. However, with supply and demand factors being so tight against each other, it's likely that the market will continue to see strong activity and charter rates going forward through the rest of 2022.

Coastal markets in the USA are not doing as well as the inland side, from our perspective, and there are several double hull ocean tank barges in the 80,000 BBL size range that continue to languish on the S&P Markets without attracting any strong interest at the Owner's required levels for sale. The available tonnage in the market seems capable of taking up any demand improvements for the foreseeable future.