Of the 13,570 vessels and 3,661 barges Marcon tracks as of early September 2020, 2,973 are supply and tug supply boats, with 352 officially on the market for sale. 64.91% of foreign and 69.35% of U.S. flag supply / tug supply boats Marcon has officially listed for sale directly from Owners. In addition to those for sale, Marcon has 99 straight supply and tug supply vessels listed for charter worldwide, seven less than one year ago, but there are many more in today's market idle and hungry for employment. 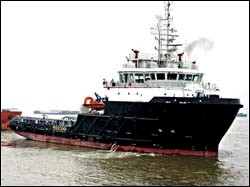 Tug supply boats officially on the market for sale in total is 151, 25 more than one year ago, September 2019 but seven fewer than five years ago, August 2015. Composition in the last year has changed with the biggest shifts being eight more each 8-9,000HP and 10-12,000HP, six more 12,000-plus HP, five more 5-6,000HP and four fewer 4-5,000HP AHTSs offered. In todayâs market many additional vessels, probably equal to or greater than the number "officially" listed can be developed on a private & confidential basis - just a phone call or e-mail away. In general, serious buyers can pick up relatively newer vessels now than in the past. August 2015, the average age of all AHTSs for sale was 15 years old, where U.S.-flag vessels averaged 28 years and foreign-flag AHTSs averaged 14 year. Today, the average age is 14 years old, with U.S.-flag AHTSs averaging 24 years and foreign-flag averaging 13 years old. At the time of this report, 60 tug supply boats officially for sale were either built within the last 10 years or are newbuilding re-sales. Only 9.93% of tug supply boats are 25 years of age. One newbuilding 5,150BHP AHTS resale is scheduled for delivery in 2020. Five years ago, 34.87% of AHTSs for sale were at least 25 years old; one year ago, 16.67% were at least 25 years old; definitely more than today's 9.93%, reflecting the purging of older units from the fleets over the past five years. At September 2020, the oldest AHTS available from Marcon was built in 1971. 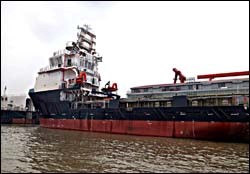 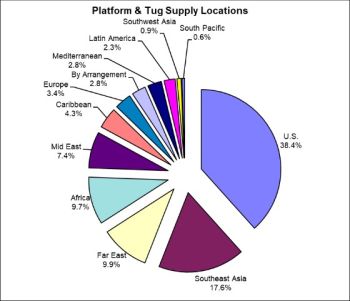 September 2020's number of crew boats officially on the market for sale by Marcon at 224 is down one from one year ago in September 2019 but up 26, or 13.13%, from five years ago in August 2015. Over the last year, composition of LOA ranges has changed with the biggest shifts being eight fewer 30'-40' LOA with an average age of 23 years (vs. 20 years old one year ago), six more 130' and up LOA (average age now 17 vs. 16 one year ago), six fewer 40'-50' LOA (21 years old now vs. 20 years old September 2019) and five more 70'-80' LOA (13 years vs. 15 years) crew boats offered. As of this report, 30.36% of the crew boats available are less than 10 years old, up from the 26.67% reported one year ago, but down slightly from the 30.81% reported five years ago. In looking at overall fleet age and then by U.S.-flagged versus foreign flagged, over the past five years we can see a slight increase in the age of crew boats on the market. Five years ago, the average age of all on the market through Marcon was 19 years, compared to 21 years one year ago and 20 years as of this report. Older U.S.-flagged vessels remain on the market, aging from 26 years in 2015 to 29 years in both 2019 and now. Foreign flagged crew boats' age decreased slightly, but are still almost half the age of U.S. vessels, going from 16 years to 15 years and then to 14 years as of this report date. According to IHS Fairplay Sea-web, of crew boats greater than 99GT 45 are shown as of September 10, 2020 to be scuttled, to be broken up or are already scuttled. This is up 16 or 55.17% from one year ago. We have seen this same trend in smaller crew boats as we are told that they were scrapped by owners due to lack of work and purchase interest. 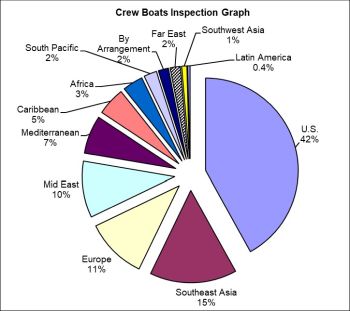 As of mid-September, Marcon's Sales Price to Asking Price ratio for all types of vessels sold in 2020 is 92.02%, an increase from 2019's 89.15% and 2018's 77.79%. Of our sales, 26% were at asking price, while the remaining sales were at as low as 42.7% of asking. This bears out what we've been seeing elsewhere - that sellers' prices have been above what the market is bearing for vessels of their age and condition or at just above scrap levels in order to get the vessel sold. 60.56% of our sales so far this year have been US seller to US buyer, 16.96% were US seller to foreign buyer, and 22.48% were foreign to foreign sales. Vessels were sold into Canada, the Caribbean and Latin America.


The stagnation in the oilfield service vessel market continues to persist. Since our last report, the world economies were effectively upended by the ramifications related to the Covid-19 pandemic and the historical impact it has had world-wide. Utilization levels are still flat or down year on year and any sales that are occurring are typically at distressed levels. Stacking of vessels and scrapping of laid up tonnage continues world-wide. After bouncing on the bottom for several years already, and focusing on consolidation, tightening of budgets and continued efforts at depleting the overall offshore vessel fleet, the first quarter of 2020 was feeling a little more positive. Possibly the long slog back had begun to look as if it was heading in the right direction. Oversupply of tonnage in the OSV market was still present, and it was by no means expected that 2020 was going to be boom time. It could have been reasonably expected at the time, that economic activity would remain stable or improve, and this helped the price of oil to climb to the $60.00/BBL. Hopefully, if things continue as they are, the price might stabilize there for a while. Now it feels more like a seismic shift has occurred. The massive drop in overall demand for oil and gas world-wide caused by the Covid-19 restrictions and economic fallout, created a glut of oversupply. Prices fell sharply between February 2020 through the end of May 2020 (Jan. 10 WTI @ US $59.04/BBL to April 27 WTI @ US $12.78/BBL). This effectively wiped out any ideas of a resurgence in offshore drilling in the short term. What will the future of offshore oil and gas development and production look like? When will the market return to some semblance of a 'normal', or even a 'new normal'?

Oil companies have effectively thrown in the towel, in some respects. Companies have scrapped long made plans and are re-assessing the entire make-up of the company's corporate planning. BP CEO Bernard Looney advised an audience in London on February 11, 2020 â prior to the full brunt of the effect of the current virus pandemic - that his company would try to eliminate, or offset all its carbon emissions by 2050. By August 2020 the company announced it was going to completely transform itself. The company declared that it was going to halt all future oil and gas production in new countries and cut its current oil and gas production overall by 40%. This was intended to lower its carbon emissions by 33%. The company also advised that it would boost its capital spending on low-carbon energy development and production by 10 times to US $5 billion per year. An oil major declaring that it's no longer primarily an oil major? Going carbon neutral? Does the term 'oil major' even apply anymore?

On July 31, 2020 Exxon Mobil advised its shareholders that it was ripping up its plans for a debt driven US $30 billion / year plan to rebuild the aging energy giant's worldwide portfolio. For the past few years its efforts had been running contrary to nearly every other major oil company action taking place world-wide. While everyone else was cutting capital spending on any new production, portfolio upgrades and improvements, Exxon was burning through its reported US $15 billion cash reserves. Rivals Chevron Corp., Royal Dutch Shell Plc and BP Plc wrote down billions of dollars of assets in the past quarter because of the depressed price outlook, post Covid-19. Exxon's actions were an effort to boost its future expectations and the company would be poised for the expected turnaround. The message and actions taken showed that Exxon was committed to massive capital spending on oil and gas production now, and into the future. This apparently didn't work to the company's satisfaction. By the end of July 2020 (after the company already reduced its capital spending plan by about a third to around US $23 billion in April 2020) the company is now imposing significant budget cuts. Up to 10% of its entire workforce is on the potential chopping block, and the company is scaling back some US $10 billion in capital outlays announced earlier in April 2020 alone. This is especially the case in relation to several highly prized and touted deep water developments. It was announced that developments would be delayed or curtailed in deep water projects in Guyana and Brazil, as well as in Permian shale, and gas exports from Mozambique and Papua New Guinea. Roughly one month after Exxon's announcement (August 25, 2020) the company's stock was removed from the Dow Industrial Average (DJIA). In 2011, Exxon (the DJIA longest serving member) was considered to be the world's biggest company. 70% of the company's shareholders are retail investors that want their dividends and this buoyed the company throughout other drops in the oil market. 9 years later Exxon Mobil is replaced on the DJIA by Salesforce.com. Exxon isn't a pauper by any means, and it's obviously a very large corporation that will continue to make very large sums of money from oil and gas and other sources. However, this represents a snap shot of what the DJIA thinks about the future of companies like Exxon Mobil's ability to maintain a high stock price and attract investors.

At the time of publication of this article, Governor Gavin Newsom of California, the world's fifth largest economy, announced that it was the state's intent to phase out gasoline-powered passenger autos and trucks effectively banning new sales of gasoline powered cars by 2035. Under Newsom's order, the state's air regulator, the California Air Resources Board, will develop regulations that ensure every new passenger car and truck sold in the state is electric or otherwise "zero-emissions" by 2035.